What is the divine reason for creation of animals?

Since animals also have an craving essence and faculty of partial will their work is not "purely for the sake of God." To some extent they take a share for their selves. Therefore since the Majestic and Munificent Lord of the (Universal) Kingdom is All-Kind and Generous. He grants a wage to them in their work in order to give a share to themselves. For example the All-Wise Creator employs the nightingale renowned for the love of the rose for five aims:
First aim: The nightingale is employed to proclaim in the name of the animal species the intense relationship between them and the plant species.

Second aim: The nightingale is an orator of the Lord among the animals which may be regarded as guests of the All-Merciful One needy of sustenance employed to acclaim the gifts sent by the All-Munificent Provider and to announce their joy.

Third aim: It is employed to announce on each of the plants the welcome offered to them [by the animals] in return for the help the plants offer to its fellow animals.

Fourth aim: The nightingale announces in the beautiful faces of plants the intense need of the animal species for plants which is a need in the degree of love and passion.

Fifth aim: It offers with a most pleasant yearning a most graceful glorification in a most delicate form like a rose to the Court of Mercy of the All-Majestic and Gracious and Munificent Lord of All Kingdom. 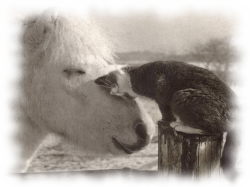 Like these aims there are further s and meanings in God's employment of the nightingale. The nightingale acts to achieve these aims and meanings for the sake of God. It speaks in its own tongue; we understand these meanings from its touching songs. If unlike the angels and spirit beings it does not know exactly the meaning of its songs this does not harm our understanding. For it is a widespread saying that "one who listens may understand better than the one who speaks." Like the clock telling you the time although it is unaware of it that the nightingale does not know these aims in detail does not mean that it is not employed for these aims. As for the nightingale's wage it is the delight it derives from looking on the smiling beautiful roses and the pleasure it receives from conversing with them and unburdening itself to them. That means its touching songs are not complaints arising from animal grief; they are rather thanks for the gifts of the All-Merciful One.

You can compare the nightingale with other small animals or insects (such as the bee and the ant) and see that the deeds of each are for certain purposes. For each of them also a particular pleasure as wages has been included in their duties. Through that pleasure they serve certain important aims contained in the creation of the Lord. Like an ordinary seaman getting a small wage for working as a steersman on an imperial vessel each of the animals employed in the duties which God has assigned to them receives a particular wage.

Some of them are nocturnal. The poetry-reciting friends of all small animals sing their praises and glorification of God when all beings go into the peaceful silence of the night. Each is the leader whom their circle of silent invocation of God's Names follow in reciting and glorifying by heart their Majestic Creator.

Another group of those animals are diurnal. During daytime in spring and summer they proclaim the mercy of the Most Merciful and Compassionate One to all living beings from the "pulpits" of trees with their ringing voices pleasant tunes and poetic glorification. As though each were the leader of a circle of loud recitation of God's Names they arouse those hearing them to ecstasies and then all those hearers set out to sing the Names of the All-Majestic Creator each in its own particular tongue and tone.

To conclude: The animals do glorification and other acts of worship in the palace of the universe by carrying out in utmost obedience to God's laws of the creation and operation of the universe the duties required by their existence in an amazing way through the power of God Almighty. These are gifts of praise which they offer to the Court of the All-Majestic Creator the Giver of Life.