This to imagine that the formation and existence of things creatures occurs through the coming together of the causes in the universe. We shall mention only three of its numerous impossibilities.
First Impossibility 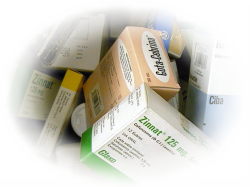 Imagine that there is a pharmacy in which there are hundreds of jars and phials filled with quite different substances. A living potion and a living remedy are required from those medicaments. So we go to the pharmacy and see that they are to be found there in abundance yet in great variety. We examine each of the potions and see that the ingredients have been taken in varying but precise amounts from each of the jars and phials one ounce from this three from that seven from the next and so on. If one ounce too much or too little had been taken the potion would not have been living and would not have displayed its special quality. Next we study the living remedy. Again the ingredients have been taken from the jars in a particular measure so that if even the minutest amount too much or too little had been taken the remedy would have lost its special property.

Now although the jar number more than fifty the ingredients have been taken from each according to measures and amounts that are all different. Is it in any way possible or probable that the phials and jars should have been knocked over by a strange coincidence or sudden gust of wind and that only the precise though different amounts that had been taken from each of them should have been spilt and then arranged themselves and come together to form the remedy? Is there anything more superstitious impossible and absurd than this?

Similarly each living being may be likened to the living potion in the comparison and each plant to a living remedy. For they are composed of matter that has been taken in most precise measure from truly numerous and truly various substances. If these are attributed to causes and the elements and it is claimed. "Causes created these." it is unreasonable impossible and absurd a hundred times over just as it was to claim that the potion in the pharmacy came into existence through the phials being knocked over; by accident.

In Short: The vital substances in this vast pharmacy of the universe which are measured on the scales of the Divine Determining and Decree of the All-Wise and the Pre-Eternal One can only come into existence through a boundless wisdom infinite knowledge and all-encompassing will. The unfortunate person who declares that they are the work of blind deaf and innumerable elements and causes and natures which stream like floods; and the foolish delirious person who claims that that wondrous remedy poured itself out when the phials were knocked over and formed itself are certainly unreasonable and nonsensical. Indeed such denial and unbelief is a senseless absurdity.

If everything is not attributed to the All-Powerful and the All-Glorious One. Who is the Single One of Unity but is attributed to causes it necessitates that many of the elements and causes present in the universe intervene in the being of every animate creature. Whereas that different and mutually opposing and conflicting causes should come together of their own accord in complete order with the finest balance and in perfect concord in the being of a tiny creature like a fly is such an obvious impossibility that anyone with even an iota of consciousness would say: "This is impossible; it could not be!"

The tiny body of a fly is connected with most of the elements and causes in the universe. Indeed it is a summary of them. If it is not attributed to the Pre-Eternal and the All-Powerful One it is necessary for those material causes to be themselves present in the immediate vicinity of the fly; rather for them all to enter into its tiny body; and even for them to enter each of the cells of its eyes which are minute samples of its body. For if a cause is of a material nature it is necessary for it to be present in the immediate vicinity of and inside its effect. And this necessitates accepting that the constituents and elements of the universe are physically present inside that minute cell a place too small even for the tip of its antenna and that they work there in harmony like a master. A way such as this then shames even the most foolish of the Sophists.

It is an established rule that. "If a being has unity it can only have issued from a single being from one hand." Particularly if it displays a comprehensive life within a perfect order and sensitive balance it demonstrates self-evidently that it did not issue from numerous hands which are the cause of conflict and confusion but that it issued from a single hand that is the All-Powerful and the All-Wise. Therefore to attribute a well-ordered and well-balanced being which has unity such as that to the jumbled hands of innumerable lifeless ignorant aggressive unconscious chaotic blind and deaf natural causes the blindness and deafness of which increase with their coming together and intermingling among the ways of numberless possibilities is as unreasonable as accepting innumerable impossibilities all at once. If we leave this impossibility aside and assume that material causes have effects these effects can only occur through direct contact and touch. However the contact of natural causes is with the exteriors of living beings. And yet we see that the interiors of such beings where the hands of material causes can neither reach nor touch are ten times more delicate well-ordered and perfect as regards art than their exteriors. Therefore although tiny animate creatures on which the hands and organs of material causes can in no way be situated. Indeed they cannot touch the creatures' exteriors all at once even are more strange and wonderful as regards their art and creation than the largest creatures to attribute them to those lifeless unknowing crude distant vast conflicting deaf and blind causes can result only from a deafness and blindness compounded to the number of animate beings.