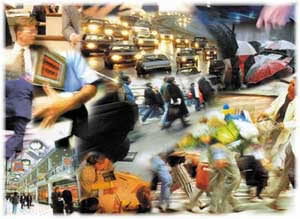 The defeat of the people of truth does not arise from lack of power and absence of truth and as is also proved the misguided people's victory does not spring from their power and capacity and their possessing some point of support; thus the answer to this question is all the above Indications. Here we shall only point out a number of the tricks and weapons they employ as follows:

I myself have frequently observed that mischief-makers who form ten per cent defeat the righteous who form ninety per cent. I used to be astonished and curious. Investigating. I understood certainly that their victory results not from power but from corruption baseness destruction taking advantage of differences among the people of truth sowing conflict among them from playing on their weak traits of character and grafting them with such traits and exciting the emotions of the soul and personal hatred and through working the evil capacities in human nature which are like mines of corruption and through hypocritically flattering the soul's tyranny in the name of fame and glory and through everyone fearing their unfeeling destruction. Through diabolical machinations like these they temporarily triumph over the people of truth. But in accordance with the verse. 'And the end is [best] for the righteous (7:128).'and the rule. "Truth is exalted and shall not be overcome." in addition to its not yielding any significant benefit for them their temporary triumph is the means of earning Hell for themselves and Paradise for the people of truth.

Thus it is because in misguidance those without power appear powerful and the insignificant win fame that they take up a position opposed to the people of truth. In this way conceited fame-seeking hypocritical people demonstrate their power with very little and gain a position for themselves through intimidating others and causing harm; they are seen and attention is drawn to them and the destruction of which they are the cause not through power and ability but through omission and failure to act is attributed to them and they become talked about. Just like when one of those obsessed with fame defiled a place of worship so that everyone would talk about him. Even if he was execrated so long as he was talked about his worship of fame made such cursing appear desirable to him. It became proverbial.

O wretched man created for the world of eternity and enamoured of this transient world! Study closely the meaning of the verse. "And neither heaven nor earth shed a tear over them (44:29)."and heed it. Look what does it say? With its explicit meaning it says: "When the people of misguidance die the heavens and earth which are connected with man do not weep over them that is they are pleased at their deaths." While with its implied meaning it says: "The heavens and earth weep over the bodies over the people of guidance when they die; they do not want them to depart." For the entire universe is connected with the people of belief and they are happy with them. For since they know the Creator of the Universe through belief they appreciate the universe's value and respect and love it. They do not nourish implicit enmity and contempt for it like the people of misguidance.

O man think! You are bound to die. If you follow your soul and Satan your neighbors and even your relations will be happy at being delivered from you. But if saying. "I seek refuge with God from Satan the Accursed." you follow the Holy Book and the Merciful One's Beloved then in accordance with your degree the heavens and earth and all beings will be sorry at your parting and in effect weep. Mourning in elevated fashion and giving you a splendid send-off they will indicate that in accordance with your degree you will have a good welcome in the world of eternity when you enter it through the door of the grave.