Is life a struggle?

O corrupted thinking! A number of your rotten and baseless foundations are as follows. You say: "Every living being from the greatest angel to the tiniest fish owns itself and works for itself and struggles for its own pleasure. It has the right to life. Its aim and purpose and all its endeavor is to live and continue its life." 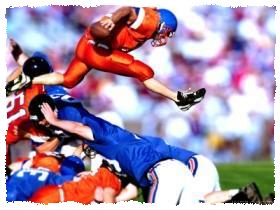 can particles of food hastening with total eagerness to nourish the cells of the body- a manifestation of that principle of mutual assistance- be conflict? How can it be a clash and struggle? Rather that hastening and assistance is mutual help at the command of a Munificent Sustainer.

And one of your rotten foundations is as you say: "Everything owns itself." A clear proof that nothing owns itself is this: among causes the most noble and with regard to choice the one with the most extensive will is man. But out of a hundred parts of the most obvious acts connected to man's will like thinking speaking and eating only a single doubtful part is given to the hand of his will and is within the sphere of his power. So how can it be said of one who does not own one hundredth of the most obvious acts such as those that he owns himself`?

If the highest beings with the most extensive will are thus inhibited from real power and ownership to this degree someone who says: "The rest of beings animate and inanimate own themselves" merely proves that he is more animal than the animals and more lifeless and unconscious than inanimate beings.

What pushes you into such an error and casts you into this abyss is your one-eyed genius. That is your extraordinary ill-omened brilliance. Because of that blind genius of yours you have forgotten your Sustainer. Who is the Creator of all things you have attributed His works to imaginary Nature and causes you have divided up the Creator's property among idols false gods. In regard to this and in the view of your genius every living creature and every human being has to resist innumerable enemies on his own and struggle to procure his endless needs. And they are compelled to withstand those innumerable enemies and needs with the power of a minute particle a fine: thread-like will a fleeting flash-like consciousness a fast extinguishing flame-like life and a life which passes in a minute. But the capital of those wretched animate creatures is insufficient to answer even one of the thousands of their demands. When smitten by disaster they can await no salve for their pain other than from deaf blind causes. They manifest the meaning of the verse: "For the prayer of those without faith is nothing but (futile) wandering (in the mind) (13:14) ."