What are the five degrees of life?

The First Level of Life is that of our life which is very restricted.


The Second Level of Life is that of the lives of Khidr and Elijah which is free to an extent. That is to say they can be present in numerous places at the same time. They are not permanently restricted by the requirements of humanity like us. They can eat and drink like us when they want to but are not compelled to like we are. The saints are those who uncover and witness the realities of creation and the reports of their adventures with Khidr are unanimous and elucidate and prove this level of life. There is even one degree of sainthood which is called 'the degree of Khidr.' A saint who reaches this degree receives instruction from Khidr and meets with him. But sometimes the one at that degree is mistakenly thought to be Khidr himself.


The Fourth Level of Life is that of the martyrs. According to the Holy Book the martyrs are at a level of life higher than that of the other dead in their graves. Since the martyrs sacrificed their worldly lives in the way of truth in His perfect munificence. Almighty God bestows on them in the Intermediate Realm a life resembling earthly life but without the sorrow and hardship. They do not know themselves to be dead thinking only that they have gone to a better world. They enjoy themselves in perfect happiness and do not suffer the pains of separation that accompany death. For sure the spirits of the dead are immortal but they know themselves to be dead. The happiness and pleasure they experience in the Intermediate World are not equal to that of the martyrs. Like if two men in their dreams enter a beautiful palace resembling Paradise; one knows that he is dreaming and the pleasure and enjoyment he receives are deficient. He thinks: "If I wake up all this enjoyment will disappear." While the other man does not know he is 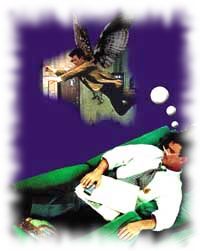 dreaming and he experiences true happiness and pleasure.

The way the martyrs and other dead benefit from life in the Intermediate Realm is thus different. It has been established by innumerable incidents and narrations and it is certain that the martyrs manifest life in that way and think that they are alive. Indeed this level of life has been illuminated and proved on repeated occasions by many occurrences like Hamza -the lord of the martyrs-protecting those that have recourse to him and performing and making performed matters in this world. I myself even had a nephew and student called Ubeyd. He was killed at my side and in my place and became a martyr. Then when I was being held as a prisoner-of-war at a place three months' distance away. I entered his grave in a true dream which was in the form of a dwelling-place under the earth although I did not know where he was buried. I saw him living the level of life of martyrs. He evidently thought that I was dead and said that he had wept much for me. He thought that he was alive but having retreated from the Russian invasion had made himself a good home under the ground. Thus through a number of such indications this unimportant dream afforded the conviction as certain as witnessing it concerning the above-mentioned truth.


The Fifth Level of Life is that of the life of the spirits of the dead in their graves. Yes death is a change of residence the liberation of the spirit a discharge from duties; it is not annihilation non-existence and a going to nothingness. Many evidences like innumerable occurrences of the spirits of the saints assuming forms and appearing to those who uncover the realities and the other dead having relations with us while awake or sleeping and their telling us of things that are conformable with reality evidences like these illuminate and prove this level of life.