What is the reason for satan's party very often gaining the upper hand; what is the wisdom in it? 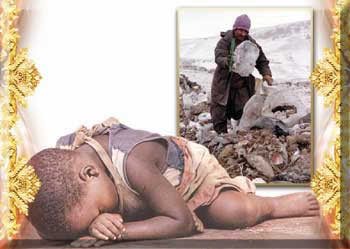 Answer: The wisdom and purpose is this: for the most part misguidance and evil are negative destructive and pertain to non-existence. While in the great majority of cases guidance and good are positive constructive repairing and pertain to existence. Everyone knows that one man can destroy in one day a building made by twenty men in twenty days. Yes although human life continues through the existence of all the basic members and conditions of life and is particular to the All-Glorious Creator's power through severing a member a tyrant may make the person manifest death which is non-being in relation to life. The saying "Destruction is easy" has for this reason become proverbial.

It is because of this that the people of misguidance sometimes triumph over the people of truth who are most powerful with what is in reality a weak force. But the people of truth possess a stronghold so unassailable that when they take refuge in it those fearsome enemies cannot draw close; they can do nothing. If they cause some temporary harm according to the verse.

And the end is [best] for the righteous (7:128)" everlasting reward and profit make up for the damage.

It is as a consequence of this rule that despite the awesome destruction in the universe of devils from among jinn and men and the varieties of unbelief misguidance evil and destruction they perpetrate just as they do not interfere one iota in creation so too they can have no share in Divine sovereignty. And they do not carry out those works through any power or ability; rather than power and action in many of the things they do it is neglect and abstaining from action. They commit evils through not allowing good to be done that is they become evil. For since bad and evil are a sort of destruction their causes do not have to be an existent power and active creativity. Rather vast destruction comes about through one command pertaining to non-existence and one condition being spoilt.

Your most effective weapon and equipment for repairs in the face of this awesome destruction of Satan is seeking forgiveness from God and through saying. "I seek refuge with Go." to have recourse to Him.