Is man the master of his own destiny?

Question: Some Christian and others religious authorities considered the creation of evil to be evil and therefore did not attribute the creation of unbelief and misguidance to God as if by so doing they were exonerating God. They misguidedly said: "Man is the creator of his own actions." They also said: "A believer who commits a grievous sin loses his belief for believing in God and affirming Hell is not compatible with committing such sins. Through fear at an insignificant prison sentence in this world a man restrains himself from doing anything contrary to the law. So if he commits big sins which mean disregarding Divine wrath it certainly points to his lack of belief." 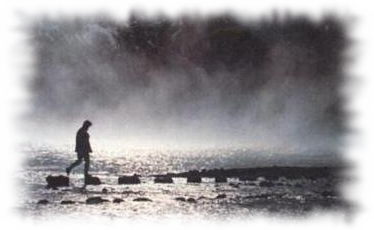 sins remain a believer?" Firstly their error has been understood clearly in the previous Indications so that there is no need to repeat it. Secondly just as the man's evil-commanding soul prefers an ounce of immediate present pleasure to a ton of postponed hidden pleasure so too he shrinks at the fear of an immediate slap more than at a year's torment in the future. Furthermore if the emotions are dominant in a person they do not heed the reasoning of the mind. Desires and delusions govern and he prefers the slightest and least significant present pleasure to huge reward in the future. And he flinches from some minor present distress more than from some terrible postponed torment. For desire illusions and emotions do not see the future indeed they deny it. And if the soul assists them the heart which is the seat of belief and the mind fall silent and are defeated. In which case committing grievous sins does not arise from lack of belief but from the defeat of the heart and mind through the predomination of emotion desire and illusion.

Moreover as is understood from the previous Indications the way of the passions and of evil is destruction and therefore extremely easy. Satans from among jinn and men quickly drive people down that road. It is an astonishing situation for according to Narration a light to the extent of a fly's wing from the World of Eternity is comparable with the pleasure and bounties a person receives in his entire life in this world yet following Satan certain unfortunates prefer the pleasures of this fleeting world which are the equivalent of a fly's wing to the pleasures of that eternal world which are worth all this world.

It is for these reasons that the All Wise Book repeatedly and insistently and with encouragement and threats restrains believers from sin and urges them to do good.

One time this severe guidance of the All Wise Book gave me the idea that these continual warnings and reminders show believers to be inconstant and deficient in good. It infers a state not in keeping with man's honor. For while a single order received from his superior is sufficient for an official to obey if the superior repeats the same order ten times the official will be seriously offended. He will say: "You are accusing me. I am not disloyal." However the All Wise Book insistently repeats the same order to the most sincere believers.

At the time this idea was worrying my brain. I had two or three loyal friends. I frequently used to warn and remind them so that they would not be deceived by the machinations of satanic humans. They were not offended at me saying I was accusing them. However I used to say to myself: "I am offending them with these continual admonitions. I am accusing them of disloyalty and inconstancy." Then suddenly the truth explained and proved in the above Indications was unfolded. I understood that the All Wise Book's insistence and repetitions were apt and exactly as required by the situation and wise and not excessive or accusing; they were pure wisdom and pure eloquence. And I understood also the reason those loyal friends of mine were not offended. A summary of the truth is this:

Since evil spirits provoke people in respect of destruction they commit much evil with few actions. Those who take the path of truth and guidance therefore are in need of much caution and great care and repeated warnings and various assistance. It is for this reason that Almighty God offers assistance to the people of belief through His thousand and one Names in respect of those repetitions and stretches out thousands of hands of compassion to help them. He does not destroy their honor but protects it. He does not lower man's value but shows Satan's evil to be great.