The virtues of faith-1

Through the light of belief man rises to the highest of the high and acquires a value worthy of Paradise. And through the darkness of unbelief he descends to the lowest of the low and falls to a position fit for Hell. For belief connects man to the All-Glorious Maker; it is a relation.


Thus man acquires value by virtue of the Divine art and inscriptions of the Dominical Names which become apparent in him through belief. Unbelief severs the relation and due to that severance the Dominical art is concealed. His value then is only in respect to the matter of his physical being. And since this matter has only a transitory passing temporary animal life its value is virtually nothing. We shall explain this mystery by means of a comparison:

For example: among man's arts the value of the materials used and that of the art are entirely different. Sometimes they are equal sometimes the material is more valuable and sometimes it happens that five dollars' worth of art is to be found in material like iron worth five cents. Sometimes even an antique work of art is worth a million while the material of which it is composed is not worth five cents. And so if such a work of art is taken to the antiques market and related to a brilliant and accomplished artist of former times and announced mentioning the artist and that art it may be sold for a million dollars. Whereas if it is taken to the scrap dealers the only price received will be for the five cent's worth of iron. 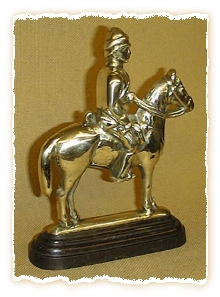 Thus man is such an antique work of art of Almighty God. He is a most subtle and graceful miracle of His power whom He created to manifest all his Names and their inscriptions in the form of a miniature specimen of the universe. If the light of belief enters his being all the meaningful inscriptions on him may be read. As one who believes he reads them consciously and through that relation he causes others to read them. That is to say the Dominical art in man becomes apparent through meanings like. "I am the creature and artifact of the All-Glorious Maker. I manifest His mercy and munificence." That is belief which consists of being connected to the Maker makes apparent all the works of art in man. Man's value is in accordance with that Dominical art and by virtue of being a mirror to the Eternally Besought One. In this respect insignificant man becomes God's addressee and a guest of the Sustainer worthy of Paradise superior to all other creatures.

However should unbelief which consists of the severance of the relation enter man's being then all those meaningful inscriptions of the Divine Names are plunged into darkness and cannot be read. For if the Maker is forgotten the spiritual aspects which look to Him will not be comprehended they will be as though reversed. The majority of those meaningful sublime arts and elevated inscriptions will be hidden. The remainder those that may be seen with the eye will be attributed to lowly causes. Nature and chance and will fall utterly from value. While each is a brilliant diamond each becomes a piece of dull glass. His importance looks only to his animal physical being. And as we said the aim and fruit of his physical being is only to pass a brief and partial life as the most impotent needy and grieving of animals. Then it decays and departs. See how unbelief destroys human nature and transforms it from diamonds into coal.