Where is the barrier of Dhul-Qarnain? Who were Gog and Magog?

According to explanations given by investigative scholars and as indicated by the title Dhul-Qarnain names beginning with the suffix Dhu like Dhul-Yazan were used by the kings of Yemen therefore this Dhul-Qarnain was not Alexander the Great. He was rather one of the kings of Yemen who lived at the time of the prophet Abraham and received instruction from Khidr. Alexander the Greek however lived approximately three hundred years before Christ and was taught by Aristotle.


Human history goes back in regular fashion approximately three thousand years. This deficient and short view of history is not accurate concerning pre-Abrahamic times. It continues back either as superstition or as denial or in very abbreviated form. The reason this Dhul-Qarnain of Yemen became known since early times in Qur'anic commentaries with the name Alexander was either that it was one of his names so that he was Alexander the Great or the Alexander of Ancient Times or else the following:

The particular events mentioned by verses of the Noble Book are the tips of universal events. Thus through his prophetic guidance. Alexander the Great who was Dhul-Qarnain founded a barrier between the peoples who were oppressors and those who were oppressed and built the famous Great Wall of China to prevent the raids of those cruel enemies. Similarly many powerful kings and world conquerors like Alexander the Greek followed in the path of Dhul-Qarnain materially while prophets and spiritual poles who are like the kings of man's spiritual world followed him in respect of spiritual matters and guidance; they built barriers between mountains-one of the most effective means of saving the oppressed from oppressors and later constructed strongholds on mountain tops. They founded these themselves through their material power or through their guidance and planning. Then they built walls surrounding towns and citadels inside the towns and finally they made machine-guns and Dreadnoughts which were like mobile citadels. The most famous barrier on earth the Great Wall of China covers a distance of several days' journeying and was built to halt the incursions against the oppressed peoples of India and China of the savage tribes known in the Holy Book as Gog and Magog and otherwise known as the Mongols and Manchurians. These tribes several times threw the world of humanity into chaos and pouring out from behind the Himalayas wrought destruction from East to West. A long wall was built between two mountains close to the Himalayan mountains which for a long time prevented the frequent assaults of those savage peoples and barriers were also built through the efforts of the kings of ancient Persia who resembled Dhul-Qarnain in the mountains of Caucus in the region of Darband to halt the inroads of the plundering and pillaging Tatar peoples. There are very many barriers of this sort. Since the All Wise Book speaks with all mankind it mentions what is apparently a particular incident recalling all events similar to it. It is from this point of view that the narrations concerning the Barrier and Gog and Magog and the writings of the Qur'anic commentators about them all differ. 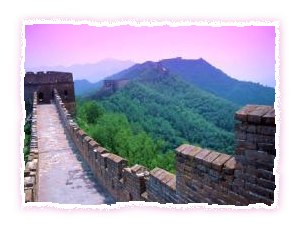 Furthermore in respect of related subjects the All Wise Book transfers from one event to another distant one. Someone who does not think of this relation supposes the two events to be close in time. Thus the Holy Book's predicting the end of the world from the destruction of the Barrier is not in respect of the two events being close in time but for two subtle points in respect of the association of the subjects. That is the world will be destroyed just as the Barrier will be destroyed. Also as mountains which are natural. Divine barriers are firm and will only be destroyed at the end of the world so is this Barrier firm as a mountain and will only be leveled to dust at the destruction of the world. Even if it suffers damage from the assaults of time for the most part it will remain intact. Yes although the Great Wall of China which is one particular meaning from the universal meaning of the Barrier of Dhul-Qarnain has been standing for thousands of years it is still there for all to see. It is read as a long embodied petrified meaningful line from ancient history written by man's hand on the page of the earth.