Buddhism is a vast and complex religious and philosophical tradition which stretches back over 2.500 years.
Over the last 30 years Buddhism has seen growth in the West as its non-dogmatic nature rationality possibility of a spiritual guide and opportunity for personal transformation have all made it attractive to post-modern society. 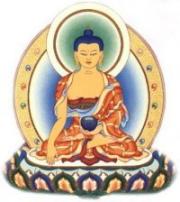 'Buddha' means 'one who has woken up'. Most people live asleep never knowing or seeing life as it really is. As a consequence they suffer. A buddha is someone who awakens to the knowledge of the world as it truly is and so finds release from suffering.

A Buddha teaches out of sympathy and compassion for the suffering of beings and for the benefit and welfare of all beings.

Buddhism has a significant tradition of seeking to convert but Buddhism can coexist with other faiths.

Buddhism has no omnipotent creator God who exists apart from this or any other universe. Belief in a God of that kind is not part of Buddhism

All existence is "dukkha"; without permanence and therefore filled with suffering. Dukkha comes from a search to find something permanent in a world where nothing permanently exists

The form in which one is reborn animal or human in heaven or in hell depends on karma-impersonal ethical law. One can escape from this process by attaining nirvana or enlightenment

Nirvana can be reached by following the Eightfold Path of: