Science and the concept of science

Despite the disasters science and technology have brought to mankind and the mistakes of the purely scientific approach in seeking the truth as well as the failure of science and technology to bring man happiness it is not right to condemn science and technology outright and adopt an almost purely idealistic attitude.
Although it is true that man has been reduced human feelings have been diminished and certain human virtues together with health and the ability to think have been wiped out to some degree yet it is an injustice to ascribe all this to science and technology. The fault lies rather with the scientists who avoid their responsibilities and sciences having usually been developed in the hands of materialistic and almost purely ‘scientific’ atmosphere and exploited by an irresponsible minority. Many worrying conditions would probably not have existed if the scientists have acquired awareness of their social responsibility and due to the shortcomings of Christianity; sciences had not been developed as considerably against religion.

Flowing to the future like a rapid flood full of energy and vitality and sometimes resembling a dazzling garden the natural world is like a book offered to man to study an exhibition to behold and a trust left to his safekeeping with permission to benefit from it. What falls to man concerning this trust is by studying its meaning and content to exploit it in a way that benefits future as well as present generations. If we wish we can call this relation between man and the world ‘science’.

Science can also be described as comprehending what things and events tell us and what the Divine laws prevailing over the universe reveal to us. It means striving to understand the purpose of the Creator. Man who has been created in order that he shall rule over all things needs to observe read discern and learn about what is around him. Then he has to seek the way of exerting his influence over events and subjecting them to himself. At this point by the decree of the Exalted Creator everything will submit to man who himself will submit to God.

There is no reason for man to be afraid of science. The danger does not lie with science itself and the founding of a new world in accordance with it but rather with ignorance and the irresponsibility of scientists and those who exploit it for their selfish interests.

"True" science consists in directing the intelligence towards eternity without expecting any material gain and making tireless and detailed study of existence in order to discover the absolute truth underlying it.

And to follow the methods required teaching this aim then without these essential points science cannot fulfill what we expect of it. Although usually presented as a conflict between Christianity and science the conflicts in the Renaissance period were mainly between scientists and the Church. Neither Copernicus nor Galileo nor Bacon were anti-religious. It may even be said that it was their religious commitment which ignited in men’s souls the love and thought of finding truth. In advance of Christianity it was Islam the religious thought springing from eternality and the love and zeal arising from that thought accompanied by the feeling of poverty and impotence before the Eternal. All-Powerful and All-Wealthy Creator of the cosmos which lay behind the great scientific advance in the Muslim world for five hundred years until the close of the 12th century. The concept of science as based on the Divine Revelation which gave impetus to scientific studies in the Muslim world was represented almost perfectly by the illustrious figures of the time who intoxicated with the thought of eternality studied existence tirelessly with the aim of attaining to eternity. It was by virtue of their commitment to the Divine Revelation that its intellect diffused a light which fermented in human souls a new concept of science. If that concept of science approved and appropriated by all the sections of the community as if a part of the Divine Message and pursued with the zeal of an act of worship had not been exposed to the destructive tumults of invasions from Asia and the seemingly endless and pitiless Crusades from Europe the world today would surely be more enlightened than it is at present its intellectual life richer its technology more wholesome and its sciences more promising. For that concept of science to which Islam gave rise was embedded in aspiration for eternality the ideal of being useful to mankind and responsible in handling things for the sake of earning the pleasure of God Almighty. 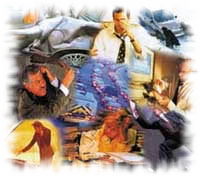 What we mean by the love of truth is approaching existence without any consideration of material advantage and worldly gain and observing and recognizing it as it really is. While those equipped with such love can by all means reach the final destination in their studies those who are infected with worldly passions material aspirations and ideological prejudices and fanaticism and who cannot develop any love of truth will either be unsuccessful in their studies or worse divert the course of scientific studies and make science a deadly weapon to be used against the best potentials of humanity. If therefore intellectuals educational institutions and mass-media have a vital task to undertake for the good of humanity it is to deliver modern scientific studies from the lethally polluted atmosphere of materialistic aspirations and ideological fanaticism and to direct scientists toward the human values. The first condition of directing scientific studies in that way is to free minds from ideological superstitions and fanaticism and to purify souls of the filth of aiming at worldly gains and advantages. This is also the first condition of securing true freedom of thought and doing good science. Having waged wars for centuries against the ‘clergy’ and corrupt conceptions formed in the name of religion and having blamed them for regression narrow mindedness and fanaticism scientists themselves should try to remain free from being the target of comparable accusations.

Islam as can be clearly seen in numerous verses of the Holy Book urges the study of nature which it sees as a place of exhibition of Divine works; it urges reflection upon creation and the created and approaching it responsibly without making mischief and causing corruptions in the world.

There is no difference between intellectual and scientific despotism arising from interest and power-seeking and ideological and ‘scientific’ fanaticism and restrictive reasoning because of corrupt and distorted religious conceptions and the dominion of a clergy. Islam as can be clearly seen in numerous verses of the Holy Book urges the study of nature which it sees as a place of exhibition of Divine works; it urges reflection upon creation and the created and approaching it responsibly without making mischief and causing corruptions in the world. Studied without prejudices and preconceptions the Holy Book will appear as it is in reality to be promoting love of science love of humanity justice and order. Founded on the Holy Book. Islam has founded knowledge and the quest for it on the intention of discovering the meaning of existence in order to reach the Creator and to be beneficial to all human beings indeed to all the creation and combined it with belief love and altruism. This is what we learn from the Holy Book as well as from the exemplary life of the Messenger Muhammad and the conduct of many who have represented it perfectly in thought and action.

So as pointed out above there is no reason for man to be afraid of science. We acknowledge that some planned acts based on knowledge may sometimes give bad results but it is certain that ignorance and disorganization always give bad results. For this reason instead of being opposed to the products of science and technology it is necessary to use them so as to bring happiness to man. Herein lies the essence of the greatest problem of mankind. It is simply not possible to take measures against the space age or to remove the thought of making atomic or hydrogen bombs from the minds of some people.

Given that science might be a deadly weapon in the hands of an irresponsible minority we should nonetheless adopt science with its products to found a civilization where man will be able to secure his happiness in this world and the next. It is vain to curse the machine and factories because machines will continue to run and factories to operate. So too science and its products will not cease to be harmful to mankind until men of truth and belief assume the direction of things and events.

Mankind has never suffered harm from a weapon in the hands of angels. Whatever they have suffered has all come from ambitious souls who believe only that might is right. This situation will continue until mankind builds a world on the foundation of faith and science.