The virtues of faith-2

Just as belief is a light which illuminates man and makes legible all the missives of the Eternally Besoughted One inscribed upon him so too it illuminates the universe and delivers the past and the future from darkness. I shall explain this mystery with a comparison I saw during a vision which concerns one meaning of the verse. "God is the Protector of those who believe; He leads them out of darkness into light (2:257)."


It was like this : I saw in a vision an awesome bridge built between two high mountains situated opposite one another. Beneath the bridge was a valley of great depth. I was on the bridge. A dense darkness had enveloped every part of the world. I looked to my right and saw a vast grave swathed in an unending dense gloom that is. I imagined it. I looked to my left and as though saw violent storms and calamities gathering amid terrifying waves of blackness. I looked beneath the bridge and imagined I saw a profound abyss. I had a dim torch in the face of this terrifying darkness. I used it and could see a little with its light. A most horrific situation appeared to me. In fact such awful dragons lions and monsters appeared around me and on the bridge in front of me that I exclaimed: "Oh! This torch brings me only trouble!" and I angrily cast it to the ground and broke it. Then on smashing it the darkness suddenly dispersed as though I had turned on the switch for a huge electric lamp that lit up the whole world. Everywhere was filled with the lamp's light. It showed everything as it was in reality. 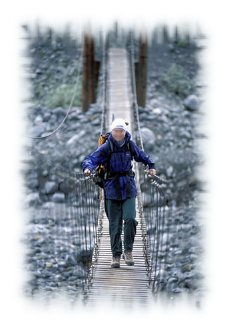 I saw that the bridge I had seen was a highway through a plain passing over even ground. The vast grave I had seen on my right I realized consisted from top to bottom of beautiful verdant gardens and gatherings for worship service conversation and the remembrance of God under the direction of luminous men. The precipices and peaks on my left which I had imagined to be tempestuous and stormy I now saw fleetingly to be a vast lovely and elevated place of feasting recreation and enjoyment behind mountains that were adorned and pleasant. And the creatures I had thought to be terrifying monsters and dragons. I saw were familiar domestic animals like camels oxen sheep and goats. Declaring. "All praise be to God for the light of belief". I recited the verse. "God is the Protector of those who believe; He leads them out of darkness into light (2:257)" and I awoke from my vision.

And so the two mountains were the beginning and end of life; that is this world and the intermediate realm. The bridge was the road of life. To the right was the past and to the left the future. As for the small torch it was the human ego which is egotistical relies on what it knows and does not heed the heavenly revelation. The things imagined to be the monsters were the events and strange creatures of the world.

Thus one who relies on his ego who falls into the darkness of heedlessness and is afflicted with the blackness of misguidance resembles my first state in the vision which like with the pocket-torch and due to deficient and misguided knowledge saw the past in the form a huge grave amid darkness imbued with non-existence. It showed the future to be a stormy place of desolation bound to coincidence and displayed events and beings which are each a submissive official of One All-Wise and All-Compassionate to be like monsters. Such a person as though manifests the verse. "And those who reject belief their protectors are the evil ones; they lead them out of light into darkness."

But if such a man attains to Divine guidance and belief enters his heart and if the tyranny of his soul is smashed and he heeds God's Book he will resemble my second state in the vision. Then the universe will suddenly take on the color of day and be filled with Divine light. The world will recite the verse; "God is the light of the heavens and the earth."

Then he will see with the eye of the heart that the past is not a vast grave but where the groups of purified spirits who each century having performed their duties of worship under the leadership of a prophet or saint exclaim. "God is the Most Great!" at completing the duties of their lives and fly to elevated abodes moving on to the past. He will look to the left and through the light of belief distinguish in the distance a feasting-place of the Most Merciful set up in palaces of bliss in the gardens of Paradise beyond the mountainous revolutions of the intermediate realm and the hereafter. And he will realize that the storms and earthquakes and tempestuous events are each submissive officials and understand that they are the means for instances of wisdom which though apparently harsh are in fact most gentle like the storms and rains of spring. He will even see death to be the introduction to eternal life and the grave the door to everlasting happiness. You can deduce further aspects for yourself. Apply the reality to the comparison!